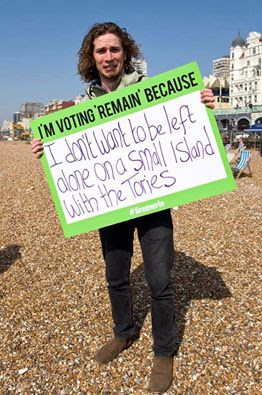 I should be watching the England v Wales game currently live on BBC1, however, I am switching off from the outside world (and hopefully I won't hear the latest scores at school pick up) and will watch it later with all the family.  Ordinarily the Euros is a tournament that lifts a nation and gives us a general sense of merriment for a few weeks (even when the inevitable happens - England getting knocked out). But sadly this year has just been one big shit fest what with the referendum splitting the nation and the violence seen at the tournament. Edit - only a few hours after writing this post Labour MP Jo Cox was brutally murdered after leaving her surgery. The man was heard to be shouting 'Britain First'.  An awful tragedy.  RIP Jo Cox.

Who decided to call the European Referendum during these tournaments for starters?  Are you a Brexiteer or a Remain or even worse an Undecided? I don't get the undecided - how can you be undecided? How can you not make a decision?  Is it because, as a nation we are so used (and like) to being told what to do, that given a 'choice' we are simply incapable? Or maybe we shouldn't have to - we elect MPs so they can do that on our behalf. This referendum should never have been called. Some say we don't know who to believe, we haven't had all the facts, how can we make a decision? Well, a decision you have to make and not just for you but for your children and their children. 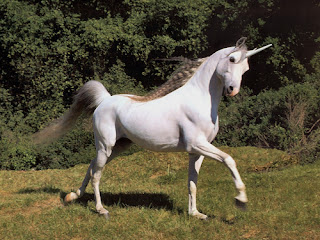 The phrase I hear a lot banded about by the Leavers is "we can make our own decisions" - this has to be the most idiotic statement of the lot.  What fantasy land do people live in when they actually think that the British Parliament is in any way democratic?  The House of Lords are full of unelected individuals that make our laws. Let us just reflect on our 'own decisions' that the EU had nothing to do with. Fill in any gaps - these are not biased in anyway to a certain party (although most are Tory policies #justsayin). So here goes on 'our decisions':-

Privitasition of the Royal Mail, Closing perfectly fully functioning hospitals (this had nothing to do with immigration we chose to do this). Closing of public libraries - and as The Telegraph wrote here it's a fine way to keep the poor powerless. Closing Surestart centres, Student fees going from £3,000 to £9,000. Fortnightly Bin Collections. Zero hours contracts. Poor Workers rights. Cuts to Disability benefits. Cuts to Child benefit - removed for mid earners. Bedroom Tax. Privatisation of Schools! Yes Schools - soon to be the DVLA and anything else that isn't nailed down.  Privatisation of vast sections of the NHS. Teaching Crisis. SATS. Prison Crisis. Fracking. Bombing the shit our of Iraq for no other reason but to remove a dictator which was replaced by something far worse. How's that working out for us?

Dipping into the 1980s - we sold off affordable housing and couldn't be arsed to build anymore so now we have people living in B&Bs at an astronomical cost to the tax payer, we sold off BT, closed our natural resources - the coal industry. What ever happened to home grown industries!! The rail network (incidentally the Germans re-invest the profits in our railways to pump back into their national railways - smart), Water and Electricity.

So if we leave the EU we can make more of our own decisions. Well I can't fucking wait to see what's in store for us. Yay to making more shit decisions.

People say the EU are making all our decisions. Name me one decision that the EU has made on your own life where you get up in the morning and think "those fuckers in Brussels have really done it this time".  Exactly.

And if immigration, migration or refugees get your goat.  Firstly, the refugees fleeing Syria aren't European so if they are determined (helped by some Brits recently) to get a boat and dodge the English Chanel to get here - leaving the EU ain't going to stop them.  More immigrants are from non EU countries again leaving the EU has no impact on that.  We do have control of our borders - we have so many opt out clauses in the EU it's a wonder they haven't asked us to leave before now. We have our own currency for christ's sake! Do you really think the French are going to help us out in any way shape or form if we leave? No.

Again, how has immigration impacted on you? Can't get a doctors appointment, a school place, the job that you never even applied for? The services are under pressure because of the political choice of austerity not immigration.

Freedom of movement - so what if you child wants to study in the EU and work there. They'll have a better chance of affordable housing at any rate. You'd deny them that? Yes, people can come here to work from other EU countries but Jesus this country is EXPENSIVE many return having worked for peanuts and realising that it's not quite the promised land.  Are you going to do the poorly paid job in a farmers field? No, us Brits have always used migrants for the shit jobs as it's beneath us.  And as for Turkey - really you really believe they'd get in? Have a word.

In or Out this has done nothing but divide the country and will continue to do so for years to come. Ultimately this country will get what it deserves.

Finally, if you really still can't decide then can I remind anyone who voted for Nick Clegg how than panned out and if that doesn't do it think of the utter nightmare this would be... 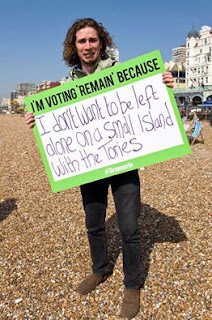 Be back soon with updates on workouts and what not!


Posted by Unknown at 14:57 No comments: Links to this post

Email ThisBlogThis!Share to TwitterShare to FacebookShare to Pinterest
Labels: eu referendum, I can't decide, in, leaving the EU, out, reasons to stay in the EU, undecided

So, it's been a while. Life is busy and I like to live it rather than document it hence the absences on here. Although, if truth be told it's more about sitting down at 8.30pm after sorting the herberts out and not being in the mood to write. I do have a blog post in the pipeline on booking holidays in France.  I did one last year on driving in France but this year I shall do an idiots guide to self catering with useful links etc.

Well, I've lost just over a stone since January.  I was going to Glow which was good in a way - you get weighed, you sit with a lot of old people (again amusing), chat about the latest food to eat (clean eating - avocados, nuts, coconut oil - oh my coconut oil is all the rage - wait 10 years and it'll be out of fashion) and then the workout. Now, there have been a few weeks where I've stayed the same and then lost a 1lb and I thought I'm not paying this if I am not losing consistently.  They don't have a magic wand. The workouts were a bit lame it has to be said and £ for £ it wasn't good value. One lady told me (like many they come for the social aspect rather than the actual weight loss) that she had been coming for 5 years and had put on 2lb that week. But I was reliably informed that had she not been weighing in for half a decade, she would be far bigger than she is now. Or maybe she would have been quids in.

And there in lies the problem with slimming clubs (which as this had exercise and just a clean eating guide rather than a strict guide I thought was better) is that you get into the mindset that you can't slim without them and invaribly you actually create bad habits i.e pigging out after the day of weigh in.  No one should be going to a slimming club for 5 years - either consistently or on and off.  Slim people do not go to slimming clubs only overweight people do. Those overweight people tend to continue to lose some, maybe a lot but then put on weight. But the slim people just stay slim without going to these clubs. They have the best mental approach and self control!

So, I've changed tactics a bit.  This club was great to get me back in the zone and get my fitness up to a level.  I am now a member of puregym - it's like the travelodge of the gym world. It's no frills i.e no swimming pool, cafe, sauna etc but it is great value with no contract and you can geniunely cancel at anytime.  It costs £19.99 a month. This is cheaper than my one class and a weigh in.  Last week I have been to a kettlebell, pump and spin workout and I'm still alive. It's half term this week so I haven't been but next week I've booked in for another 3 classess.

I think I did get lucky though as I was able to book on line relatively easily as it just opened. However, I have recently found out that the times of the classes come up at 12.00 am - yes that sounds like a good idea said no gym user ever. Wonder why they didn't promote that on their PR onslaught? I have seen tweets whereby all classes are gone by 12.05 am! Well, I'll be darned if I'm going to set an alarm and wake myself up so I'll just chance my arm and go on a waiting list or just turn up. Watch this space to see if my membership gets cancelled asap.  So far so good though.

By the way, I seem to earn more money from this blog when I'm not writing than when I do write? Go figure.