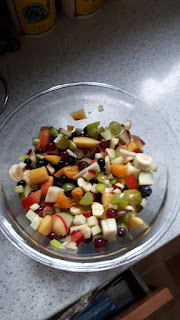 Well howdy folks.  Let's get straight into it - 1.5lbs off this week. That's 13lbs lost since the start of February. I am so tantalising close to my first stone.  Now, last week I maintain and the previous week its was only .5lb.  I did go off track so there were no surprises and I could have done better last week. But I have never put on since I started which I'm very happy with.  I don't care its not falling off - like my sister said "you've got to live". Very true.

I really noticed the weight loss today whilst riding my bike to the fitness/weigh in class. When I first ventured out at the beginning of the year - I had to stop 3 x to get up a very long steep incline of a road. Today, I got to the top of the road without stopping. Now, my lungs were burning and I was panting somewhat but I didn't stop = progress. That said I now loath my chunky Halfords bike and desperate to get another bike but the choice and information on bikes is overwhelming.

Given that 2016 has been pretty shit in lots of ways. I'm also happy that I didn't derail myself off course. My dad is now home and recovering so that's great. He lives to see a few more years yet. However, its now been my husbands turn to be ill (he recently celebrated his 52nd birthday if you can call it that!) - high blood pressure.

Although, I'm not meant to tell people but this doesn't count right?! In fact, I think I've told most people I've come into contact with. So, if you are one of them - don't mention it! His blood pressure was 177/155 I kid you not.  Now, I've googled lots about it and its pretty darn high - hypertension level 3.  I think he's always had it but a particularly exhausting start to the year, lots of other stuff going on, has in no way helped.  His head felt like it was in a vice constantly coupled with dizzy spells and nausea. He had a BP monitor for a day and the hospital said whilst high it wasn't an emergency.

They call high blood pressure the silent killer but there hasn't been anything silent about this! Untreated it can cause strokes (I have firm instructions to whisk him off to dignitas if he becomes wheelchair bound) and heart attacks.  Thankfully, it is coming down and he said to the doctor "I can't leave here without medication otherwise my wife will kill me!" so a low dose of tablets should hopefully sort him out. That is assuming its not some underlying condition.  Oh the joys of everyone getting older!

I am writing this on Thursday and I am pleased to report he is much better. I think a rest was just what he needed.  It does make you take stock though - I need to keep healthy (my husband is 10 years older than me) and fit to make sure the kids have one parent around.  All being well, there's a good few years left in the hubster yet but I never take that for granted. No one knows when their time is up. I also (I'm a cheery optimistic type can't you tell or I maybe I'm just a realist - none of us are getting out alive) think this is the year we stop putting off writing our wills. People assume that if you're married that every thing is dandy but it doesn't work like that. If one person dies without a will things can get messy, ugly and complicated. People often come out of the woodwork when in life they couldn't give a monkeys about the deceased. Any whiff of some money all of a sudden they're back in contact.  So, that's on my to do list marked urgent.

In other news, the kids break up early for the Easter Holidays. Yeeharrr - although the weather looks decidedly crap for the bank holidays.  Nevertheless, we shall kick back, relax and switch off those pesky alarm clocks. Although, it was a short half term they all appear to be knackered.

Right, off to get them but will be back during the holidays for more chit chat a la 1970s style.