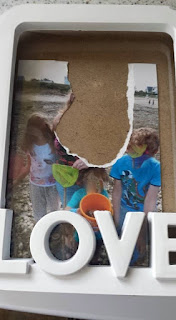 How's about this then. This did horrify some of my fellow facebook friends when I posted it as my status. However, it did genuinely make me laugh out loud - literally for once - not an internal chuckle that people mistake lol for together with "oh that's nice" when I saw it for the first time.  As you can see, this lovely family photograph has something missing, my head! My daughter's handy work. This is the result of my telling her off for treading blue plasticine into my rug. Fair comment I'd say and my daughter thought his was a fair response.

She can be a tad fiery it has to be said. She has often written me a lovely card one minute and torn it to shreds the next. I don't take it personally she regrets it later on and I have reminded her that if I ripped up everything with her face on, every time she or the others annoyed me, they'd be no pictures left.

The next day she wrote this lovely poem and it has remained in tact. But for how long?! 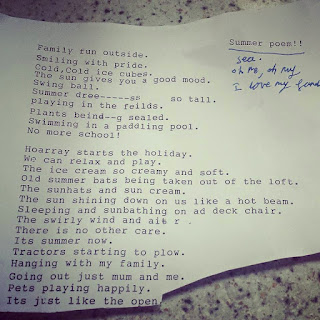 Now some might question why I choose to put such an obvious sign of parental hatred (albeit briefly) on facebook. Well I'll tell you why - facebook is such a load of bollocks. You know it. I know it. Who puts a 'keeping it real' status? No one. As we're all happy, charity giving, peace loving (except the kick everyone out brigade) hippies and perfect parents.

It used to be a way of keeping in touch with friends. This is the sole reason I opened an account. My good friend had moved to Hong Kong I'd often phone her using a 2p a minute rate. This wasn't that easy as you had to factor in time difference etc etc. She demanded I "get facebook".  I was still a luddite then and felt a bit scared by it all. It took me about 6 months to come around to the idea and it was brilliant. I could see her photo's and what not - it was like old times.

It then progressed into people updating statuses 4/5 times a day - guilty as charged. People soon got bored of this cue food, drink and aren't we having a cracking time documenting our night out. Again, guilty as charged. Then it was cliche sayings - rent a deep and profound quote and claim it as your own - not guilty as charged. This is my favourite one to hate and, of course, I've already ranted about it here 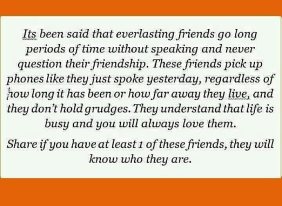 You know - share if you have a friend you never see, never speak too, couldn't give a toss about but it still means you're great friends. Erm no it doesn't. It means you can't be arsed. Then it was share this and you won't get killed,  die of some crippling disease and share if you want to win some money. Yes, we were into chain letter territory. Then it was take a picture of yourself or some other self absorbed nonsense in the name of curing cancer.

Now I see what people like and comment on and a lot of it is racist ignorant shit that makes me want to unfriend a whole load of people. The latest trend appears to be women of a certain age, lets say mid forties, who post pictures of themselves in their glory days to show you what they used to look like. Stop it!! Those days are over. You don't look like that now. You look 45 - actually a tad older if truth be told. Ouch! Acceptance is key. Yes you were once slim and pretty now you're not so. Get over it. It just looks desperate.

My friend came off it for a while as she said she was sick of seeing parties her kids weren't invited too and everyone having this perfect lifestyle. I'm not too fussed about that - I don't care if you're been to Legoland as I know what I like and know what I don't like. A merlin pass is my idea of hell. I don't think oh we should be doing this based on what I've seen.

My problem is my sodding 24 hour newsfeed. I've always liked current affairs but its got a bit out of hand. Any major incident I'm the first to know and if you follow me you will probably find out the latest atrocities from my newsfeed. I am your doom and gloom friend on facebook. Just to kick you when you're down I might just add a real political rant together with some conspiracy theories thrown in for good measure.

Another friend said she absolutely hates facebook and has come off  it. Her reason "too much negativity" see me above!

So why for the love of god am I still on it?!  Not only is facebook about the above its also has the potential for you fall out without you knowing. For instance, one friend has clearly made a point of never ever commenting on anything I do when before they always did. Clearly there has been a fall out of some description but I don't know what. I'm a bit slow on the uptake and it did take me a about 6 months to realise but I have now. Thank you. Thank you for your passive aggressive behaviour. Much appreciated. A few other people like to deride me - you know instead of just saying oh that's nice or some other normal response - I generally get some catty remark. They may as well just put "you're an utter wanker" and be done with it.

The problem with me deleting my facebook account (I have no real need to validate my existence on there) is that it calls into question my blog, instagram and all the other stuff that goes with making a blog successful.

So, what to do?  I am going great guns with my weight loss so I'll continue (uneasily so) as I am as it keeps me in check. But I know that one day I am going to try and live an anonymous life without social media and the like. It has to be worth it just to never ever see those murderous 6 months to Xmas countdowns.

In the meantime "going to put my feet up now and watch a bit of telly!"

See you shortly for weight loss updates and general tittle tattle on my extreme version of facebook - my blog! Now aren't I just an absolute hypercritical wanker. Like if you agree! 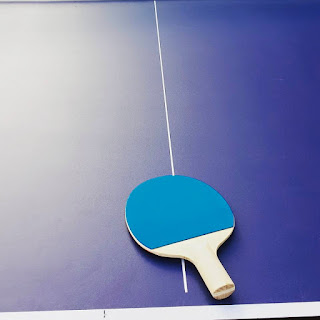