Well not quite a pop but a sharp pain which was enough to stop me in my tracks - a bit like when a footballer pulls up immediately when they've torn a hamstring. Yes that kind of pain! I knew it! I knew that running would be no good for all my joints but I bowed down to pressure and went for it anyhow.  Now, its not everyone else's fault as clearly no one forced me to take up the C25K challenge and I did feel I have eased into it rather than getting injuries etc.

On the plus side, I don't suffer from shin splints at all - which I have been known to even when walking really fast. However, it does appear I have now developed Runner's Knee - by all accounts its not really the knee that is the problem. Its either your tight hamstrings (always had those), your thigh muscles not cutting the mustard, not stretching properly, high arches (tick) and hip placement. Think I can tick all of those.

Okay so I don't want to stop. I have a playlist and everything! I can't stop and it has helped although this week I have stayed the same weight. I ran 2.3 miles on Monday and felt really good - the breathing was great and so were my legs and yesterday I ran 2.8 miles all set to complete my 3 miles when I felt the sharp pain on my down the hill.  The lovely old boy I see in the park (who regularly gives me a thumbs up and "you're doing really well" shouts of encouragement) asked if I was okay and that he had some water in his car. Bless. Actually maybe he had more than water in his car....

Swiftly moving on, I do run on a soft surface like they recommend, however, the park is hilly and curvy (bit like myself) which isn't great for running. I may have to adjust it a little. The above article on runner's knee suggests not increasing my mileage by more than 10% - no fear there and using smaller strides up hill - again no fear there. I did, however, run with a wider stride yesterday i.e tried to go faster. Another site recommends you bend your knees more and also imagine you're running on a white line but move your feet outside that line.  So I will rest it tomorrow and see how I go next week. I think its time to dig out my bike in any event.

In other news, the Tour is well under way and as ever am loving it.  So much so I'm currently watching it live. I hope my Auntie is too - she's been known to much many stages live - over 4 hours of it - so addictive! See you shortly. 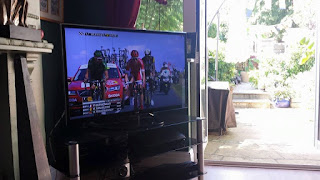