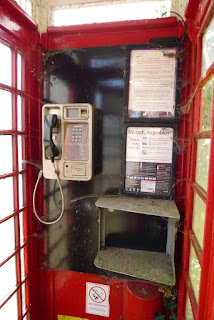 Yarp. Thought I might hold out until my eldest was 13 but didn't quite make it that far. He now has a mobile phone. Nothing fancy a pay as you go Samsung phone. He is now at an age where he will need to go out and about on his own and it does make me feel better that he can text to say "I've arrived".

Having said this, we all managed to get to school without running into a pay phone and telephoning our parents to say we've arrived back in the 80s. Lets be frank though - back in the 80s parents didn't give a shit if you got there or not. You didn't get taken to after school clubs, swimming lessons, various activities, days out and were grateful if you got taken on holiday. I started holidaying on my own from age 16 imagine that now.  By 18 you were kicked out of home and told not to come back. Parenting is now serious business and whilst I do so enjoy it - I reckon back in the 80s no effort was required. Did that make us more resourceful? Only time will tell. It certainly made us more active. But doesn't every generation think the one after them are doomed to fail?

Now, my son's phone beeps at an alarming rate as he's now able to message his friends on a regular basis. It is surgically attached to his hand. Mmmm pot and kettle as my son pointed out so is mine. He was quickly taken down - I switch mine off after bedtimes and I am the keeper of the home and all play dates. Without my phone sunshine you'd have no friends come over, activities and anything else for that matter.

However, last week, the whole phone thing failed dramatically.  The 'safety net' of the phone has been proven, in spectacular fashion, that it does not actually give you any reassurance nor does it prevent anything bad happening to your child. My theory was, in the event (unlikely I know) of my child being abducted on his 3 minute walk to his local secondary school, I would be alerted to this fact by the absence of a text. Time is of the essence don't they say when it comes to disappearances. So with that logic in mind I would be able to alert the authorities quickly and know within a very short period of time that my son hadn't reached school.

But add this to the mix. My son is a tit in a trance at times. He is very bright but is also extremely impractical and forgetful. He had attended a holiday (bus man's) camp for his new school. The deal was he would text me when he arrived.  I took my other two to an intensive swim course and realised at 9.20 am I hadn't received a text. Did I alert the authorities? No. Did I ring the school? No.  I assumed that he had forgotten and I also didn't want to embarrass him (and myself)  by ringing the school to see if he had arrived.  I couldn't get a signal at the pool in any event. So there you have it the whole safety net blown out of the water. The thing is, had my son been abducted, he would have naturally thought "my mum will be phoning the police and I'll be rescued".  No, mum wouldn't have done that son. See above.

Turns out he didn't forget I just didn't receive the text! What are the odds on that? So the phone is here to stay and the confusion and worry no doubt.

In other pressing matters on the diet front - I have been pretty much armchair bound watching The Tour De France - another fantastic tour this year. Frommey was awesome as were the rest of the team, in particular, Geraint Thomas.  Shame about the spectators behaviour but thankfully that's just a small minority.  Anyhow, my knee is much better I would have rested it for 2 weeks Wednesday.

I have lost -1lb over nearly two weeks is it? I feel a bit out of shape though I really miss the running. I'm sorry I haven't blogged much. It can get a tad busy with the kids off but I will be back this week.

Email ThisBlogThis!Share to TwitterShare to FacebookShare to Pinterest
Labels: what age should a child have a phone