....and parenting politics are some of the things that featured in my week that was. Sorry, its been a week - the sun has been shining and I was exercising.  I managed 5 x workouts - yes you heard right my friends 4 x kettlebell workouts and 1 x 30 day shred workout. I also did a little bike ride with the kids on Sunday. I've done 1 x kettlebell workout this week and its only Tuesday. I need to put in the same amount this week also. So on the exercise front I am back on form, however, I haven't lost the 2lbs I put on. Darn it. I'm not too worried (am I ever!) as a friend who has hired a personal trainer (and I'm not saying I am working out to that level) actually put on weight one week when she worked out 4 x so I'm hoping it might be a body shock or something as my stomach looked and felt slimmer on Sunday.  I think pictures can tell more than scales in any event.

I don't really go on twitter that much - about 10 tweets a week if that. Anyhow I was promoting these England garden plaques my husband makes - he also makes other ones but these ones are specifically for the World Cup. So, trying to be a canny business woman, I tweeted a few people who mentioned the England flag and general house decoration. I failed to look up the timeline of one vile illiterate idiot so he tweets back "beat it you f'ing Chav scum" or words to that effect!! Not one to shy away from taking someone down - I pointed out his grammatical errors I think I did use the word 'illiterate' to which he replied he would hate to be as ugly as me!  This really made me laugh. Firstly, he missed a trick did he not - he didn't call me fat or old but ugly. Flattery will get you everywhere. I asked if he was 10 and whether or not he had anything else in his locker asides from insults and bad English. Clearly not as he buggered off back to taking photo's of himself and continuing with his painful tweets eg can't decide weather or not to go out. Had to fully restrain myself not to continue this pointless row with a total random knob stranger and say don't you mean whether.

Then yesterday, having not learnt my lesson from engaging in any way shape or form on social media, I decided to leave a comment on a parenting website. This was after a what do you think of this type post. I was quite frivilous called the child 'vile' and that her barbie dolls should have their heads chopped off! On reflection this probably wasn't the most adult comment I could have left but it was the first that came into my head and brain and touch type did not engage. I'm pretty sure I typed what most people thought. In any event I got my telling off from two chattering classes type who really should have better things to do than stick up for some spoilt brat that needed to be taken down a peg or two. Oh get a sense of humour people!! You can't say anything on these types of forums without it all kicking off and really its best just not to say anything. It is the modern day Colosseum out there people! Beware. You have been warned!

I am really looking forward to Britmums - its next week and we've been sent an email detailing all the various stands and prizes people prizes!! I'm going to be seeking out the Butlins stand as they're looking for Ambassadors (pick me!) and other companies.

I am room sharing with Rachel threeyearsandonestonethenhome who keeps telling me to bring my PJ's!! Maybe she's thinking what if this woman is a total nutter who struts around naked? What if she sounds like she's a pearly queen and does the Lambeth walk into the conference? What if she's a psycho? We've never met each other so maybe it is a bit weird to share but I know it'll be fine and if I am murdered then Rachel is the prime suspect if you please!

Finally, as I need to watch the complainers, I saw this in the paper the other day and all I can say is Hooray!! 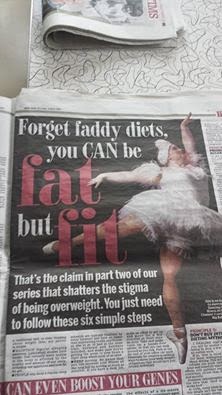