No one could have believed...

...yup not tiring of this yet. Can I bore you all with my Richard Burton antics for a few weeks longer? Well, well, well I haven't had a delay of a week on the blogging front for quite a while and I best not get into a habit of this because I am now ranked 235 in the tots100 parent bloggers of some 8,000.  No one would have believed....I'm really chuffed with this as before I didn't have a number -I was just ranked in the Top 500 (297) which was very nice but I always fancied a number and now I have one. Let's hope I don't come crashing out of the top 250 blogs - you'll soon know as the number will be gone. In the early days, I actually didn't mind where I was (sometimes I actually liked it if I went down. My blog had a cult following don't you know - I didn't need to be ranked!) and I'm still not overly into figures etc but it is a nice thing to have so I'll take it thank you very much. I also find out on Friday whether or not I got enough votes to get into the Final of the Brimums blogging awards. Correction since writing this a minute ago my rating has changed to 273!!! Argghh I am back to not having a number!!!! 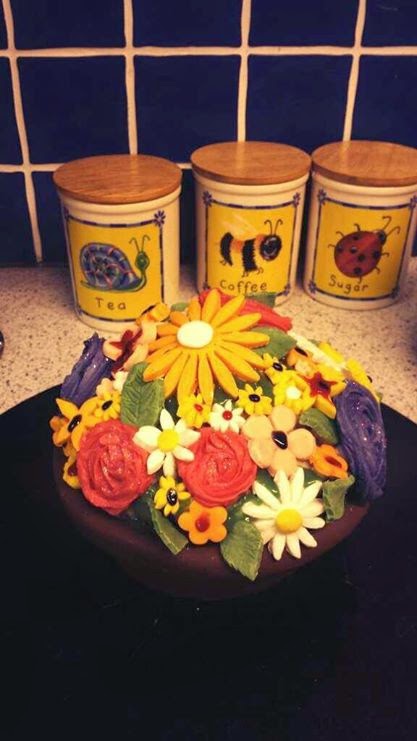 Anyhow, enough of me, me me. Oh yeah, its a blog  it is about me!  So, why the absence last week? I had to make another cake. I didn't have to - I wanted to. It was for the kids Spring Fayre (another thing I love about this school they spealt fayre not fair) - a cake competition which incidentally I won jointly with a child. Takes a bow.  Again, I wasn't dying to win - promise. Am I coming across all fake and humble a bit like Gary Barlow? I wanted a quick and easy one and whilst the construction was - the decoration took me bloody ages and I got really bored with it. The end result was nice although I should have covered it with green butter cream so I didn't have to totally cover with flowers. I don't do detail. Next time I would make the pot the day before so it goes hard. I didn't realise the weight of the flowers would push the rim off so I had to re-do it on the morning at the back at which point I was glad to get shot of the thing. 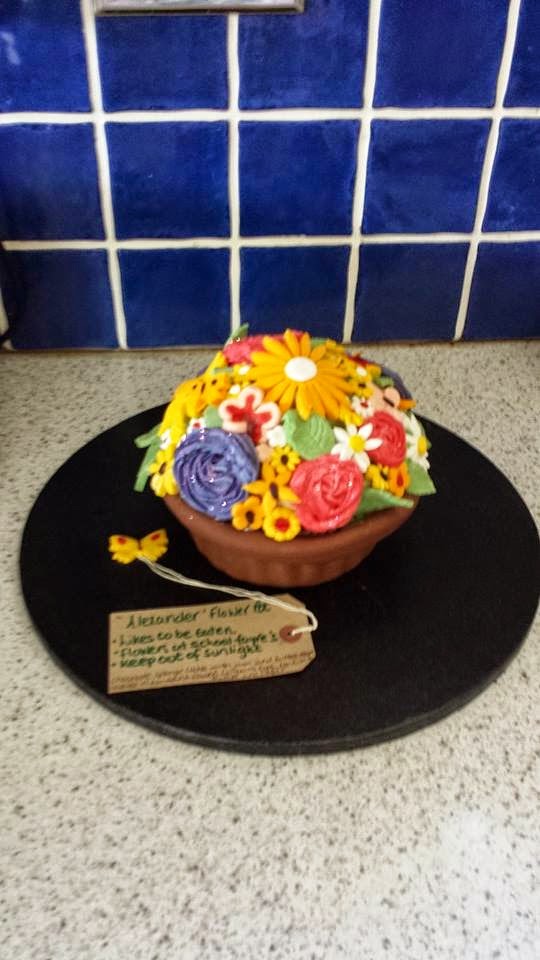 I went swimming on Wednesday and did 50 lengths, however, this time I did 30 lengths of the crawl which is far more intensive than the breast stroke. I think the breast stroke gets a bad press - if it does which it probably doesn't but it sounded right. Whilst you're not giving it large like the crawl - you definitely feel your stomach muscles working and to be honest its the only time my stomach feels like it has the potential to be flat. There was some dodgy swimming etiquette going on in the pool that morning. For instance, a lady was doing a rather powerful backstroke so much so she nearly took my head and shoulder out. Luckily I anticipated that she wasn't going to have any person awareness which, call me a stickler if you will, you should have if you are swimming on your back and you know there is someone up ahead of you.

She said sorry so I didn't hold her head under for 3 minutes. Then a troupe of old dears (this is a different group of old dears who meet for their lesson in the first lane with an instructor poolside) lowered (was going to say jump but there was no jumping going on) themselves into my 'medium' lane which is anticlockwise - fast is clockwise. I have no idea why. Its swimming. Rules and Regulations. This. May. Be. My. New. Blogging. Style.

But they decide to swim against the tide of the rest of us and the board which clearly says (and I might add demonstrates with little arrows) anticlockwise. In fact, one even said "you're swimming the wrong way" but proceeded to follow her as did the other one.  So I got pushed out into the fast lane by the old timers. To be cut up by the fast swimmers who wanted me back in the medium lane which was in disarray. And that my friends can turn a fairly pleasant swimming session to one marred with danger and old women not giving a flying BEEP!

Onto my steriod injection - yes my pesky heelgate, heel injury, bloody pain in the heel. On Friday I had my injection. The doctor asked "how are you with needles?" I didn't quite know how to answer that. Its not your regular question is it? I thought do I say "I don't encounter them often" "I love them" anyhow, I plumped for "ok I guess but since you've asked like that you've got me worried". I had visions of this giant comidic needle heading towards my foot. I hadn't been that worried before he asked me that question. Anyhow, it was fine. I told him I'd had 3 c-sections and gave him a brief summary of my 3rd less than pleasant c-section using 'horrific' and "epidural wore off" "could feel my stomach being pulled together" for maximum birth story effect. Some bugger always tops it though I can tell you that. I can lose 2 litres of blood be on the operation table for 2 hours and some mum will say "well listen to mine..." and I get well and truly trumped. You need an intensive care and being brought back from the dead to stand any chance of winning the most horrific birth story I can tell you. Mine is minor compared to some believe me. They are worthy winners.

Anyhow, my heel still frigging hurts!!! Screw you heel! So tomorrow I'm doing my weights (I did pilates this morning) - I don't care I can no longer hold off on all the exercise. Me and steriod injections (cue violins) just don't get along. I had one in my coccyx (remember that) and it did nothing for me.

I shall leave you with my new toy -  a boxing punching bag thang. I haven't got into a routine with it just yet but I will do.

Weigh in tomorrow plus I have some Top Ten blog posts to tickle your fancy this week.

Until manana amigos
Posted by Unknown at 21:39