Did you? Did you really..

...literally die?  Did you literally piss your pants? Did you literally fall down? Urgh! Stop with the LITERALLY!  I literally cannot take it anymore. Please find something else in the English language there are plenty of words to chose from I promise.

I accept there are times when the word literally will add effect and what not as does swearing when telling a anecdote but by over using the word literally it just makes a mockery of the story doesn't it?  So if you're saying "it was soooo funny I literally pissed my pants" and I then say "so you pissed your pants?" and you say "well no I didn't" then I'm thinking well you didn't literally piss your pants then did you.

Last week I happened to be watching BBC news 24 - I have no idea why as whilst I like to keep up-to-date with current affairs I don't need to watch 24 hour coverage. Anyhow, this mummy author - I say this as she was telling the chap how she had written her book in the car whilst on the school run etc. All good - fair play and all that but every sentence was littered with the word literally. For example, the interviewee asks "so you had to go to all the different publishing houses?" "yes I literally had to go to all the publishing houses" and "you wrote this in the car whilst waiting to collect the children" "yes, I literally wrote whilst waiting for them" and so this dreary painful conversation went on. Let's hope the book has a variety of different words she has managed to delve into.

I'm going to put literally in the same category as an exclamation mark after RIP (see this post on my rant on this subject) although there is no place ever for that nor, indeed, a smiley face which (seriously this literally happened) I saw on facebook when someone expressed their condolences in the way in which you would respond to someone who had just posted "I've purchased a new handbag". In their heartfelt response I counted not one but five exclamation marks, the word 'you' written as 'u', the words big hugs, lots of xxxxx and then the final nail in the coffin (if you can possibly excuse my inappropriate pun) was a smiley face. A smiley face?! My jaw did drop as it did the other day when someone made a comment about the traffic around our streets due the murder (see previous post) someone thought it was okay to write "well the roads could have been re-opened about 30 minutes ago" to which I had to muster all my self restraint not to thump down on my keyboard "yeah really fucking inconsiderate getting murdered on the way home by a deranged nutter raining down 100 knife blows into your body isn't it you cocksucker!" I restrained myself - I  didn't put cocksucker. Proud? Please see your facebook timeline for all manner of social disintegration.

Whilst I'm going right into one can I also say how I hate those sickening bucket type posts which say something along the lines of "be nice everyone is going through a battle you know nothing about". Actually I've found one - here it is... 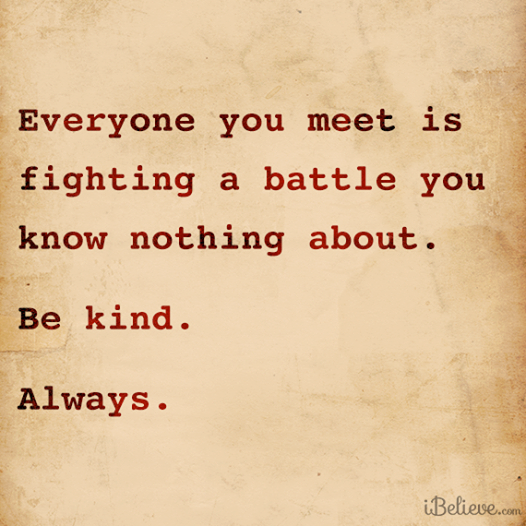 Oh do fuck off. No, everyone is not fighting a battle - people can be wankers even if they haven't got shit going on. People piss people off. And lets be realistic there are battles and there are wars. I know people who genuinely (or should I say literally) are going through real wars of critical illnesses of loved ones, child disabilities and the like. I have to say I think people use it as an excuse.

Okay I did come on here to do my Saturday chit chat but came over all cross! What's new? I have booked a steroid injection into my heel next week. I managed to finish my Vegas collage and album. I just have to do one of Buddy and finish putting our holiday pictures away. The hubster sorted all our CD's out and put them on the Ipod which took him all day. We're in a sorting mode at the moment. He also ordered a punch bag and gloves for a new type of fitness workout - am looking forward to trying it out. There are some really comical you tube clips of guys (with 10 packs) showing you how to box so if you fancy a bit of eye candy check them out.   I will pop pictures up of Buddy's Batman cake and how to do it shortly. I was also going to compose a list of my top 10 irritants and the like and some more diet tips. What do you think?

Email ThisBlogThis!Share to TwitterShare to FacebookShare to Pinterest
Labels: everyone is fighting a battle, the over use of the word literally, using literally in conversations, what not to write on facebook