Yesterday was World Book Day and, as I mentioned in the last post, my children's school had lots of fun activities planned. They needed a home made costume or one that you had knocking around. Now you may not be surprised to hear that I'm not very crafty. I have a friend who used to squeal with excitement when they brought the crafts (Claire if you're reading this - it is you!) out at playgroup many moons ago. In fact, if I recall, she even used to arrange the craft activities and everything. So, without further ado, here is our creation. My husband has to get full credit for cutting the head out of cardboard and attaching an old cot sheet - actually, what did I do? Oh, yes I made the nose from a pair of tights - no idea if they were new or not - and filled with cotton wool. I also cut out the fabric for his mouth and dug out the rucksack (does that count?). My son painted etc and I think the overall effect looks awesome! He could see through the mouth part. What do you think? Not bad, not bad at all.

For any of those who are not familiar with this range of books - in it are little cartoon drawings and that's what his outfit is based on. Now, if you think that's good you should check this out.. 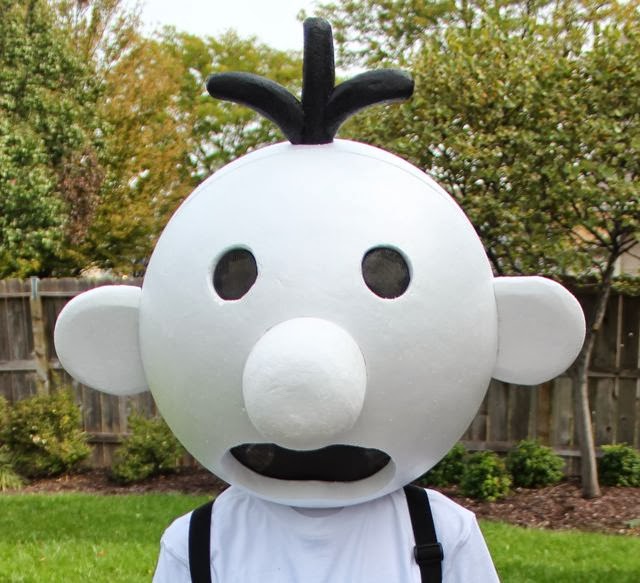 I was seriously impressed when I saw this creation having googled "diary of a wimpy kid costume". The person who made it has written a blog post detailing how it was made. You can check it out here

So, in the morning I was able to go into the children's classrooms and read together. This was lovely, although I left fairly shortly in my son's year (year 5) as you could hear a pin drop! It was only for 30 minutes but was a nice thing to do. They then spent time in different classrooms through out the day doing various activities and then finished off with a book assembly with prize giving for the best costumes and.... tah dah both of them won a prize! My daughter went as puss in boots and we managed to gather enough bits and pieces for a rather decent costume.  Naturally they both won a book.

In other news, I completed my Wii Dance 3 today with wrist weights and 100 skips of my skipping rope. I'm going to aim for increases during next week of the 100 skips. I have been offered the chance of reviewing a VLCD - that stands for very low calorie diet (600 cals). Now that sounds like when you're really ill and can't eat anything, you lose weight and then once you're back to normal you put it all back on. What do you think?  My first thoughts were this sounds horrendous however it would make an interesting blog post, its a freebie and I am curious to know what it feels like. It also makes me very fearful that it will totally mess up my metabolism and that it is very bad for you. Its not something I've ever done before or likely to try again. I've never done the Cambridge diet, soup, Atkins, low carb etc etc.  They are offering my readers a competition giveaway of 2 weeks of the VLCD. Let me know your views.

My sister Sharon has done a great blog post on her half marathon preparations which I will post this shortly.

That's all for now folks!