I am pleased to report a -1lb weight loss. Better than last week which was zero. I manged 3 x work outs if you can call them that. I had the swimming, the Wii dance and....dah dah dah..I managed to get out on my bike (which I have to say my behind is a little sore - it will soon hardener up no doubt) with the kids on Sunday. This isn't really a work out as such but was still good to be out and about for an hour.  Tomorrow I plan on going swimming again as I really enjoyed it last week.

So what has been going on in this ere house.  Well my son is away on a 5 day residential trip with the school. He was very excited and not a bit nervous which I was really pleased about. Surprisingly I was very relaxed about it also. I find a worry more at night and normally weeks before an event so when it actually came around I wasn't fretting etc.  One mum felt a bit sick and worried as her youngest was going and I was going to say least they're sitting at the front of the coach as I heard the back is the worst place to sit. But you will be pleased to know I kept my mouth shut for once! I think that's my biggest fear the coach might crash or something. Anyhow, buddy was more upset wailing as the coach pulled away and then my daughter was teary this morning saying how much she missed him. Which was news to me as normally they bicker every day after school. Kids are funny creatures aren't they.

We are also have a living room make over - we've gone all a bit National Trust which we didn't plan to but it seems to be working.  The walls are green and I have nice red curtains going on, oak laminate and we have ordered two new chesterfield sofas (on my bucket list - aim low that's what I say to avoid disappointment!). I also ordered a tartan rug and changed the light shade on my lamp to this.... 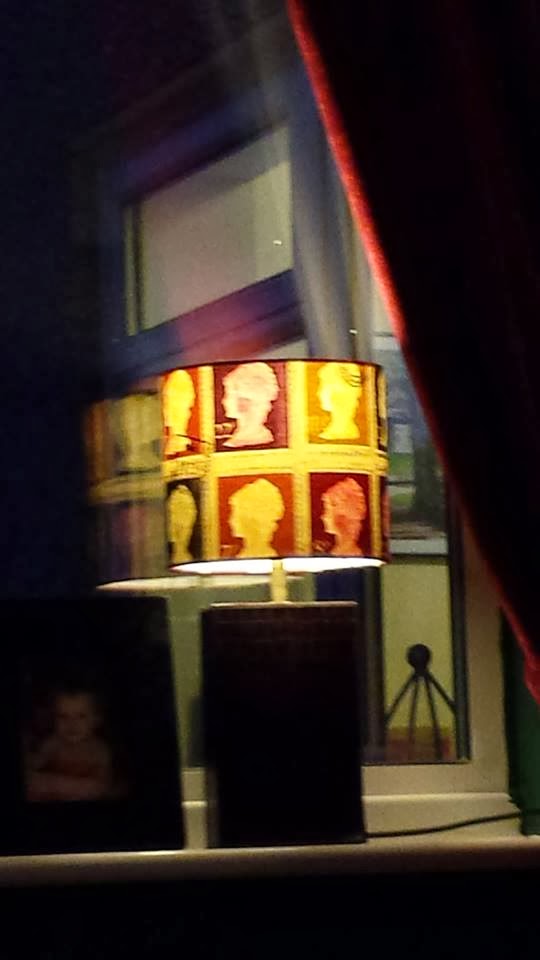 In other sad news the RMT Trade Union Boss, Bob Crow died unexpectedly today of a suspected heart attack at just age 52.  I, for one, was very sad to hear this.  I have made no secret or apologies for my left wing stance on political matters of which I have written a plenty on this blog.  For me, here was a man that stood up for workers rights - pay, health, safety and conditions. Terrible that isn't it. Why should the working man be paid a decent salary, get holidays and be entitled to a pension? What rotters the unions are for wanting to bridge the gap between the very rich and very poor. Why should people get paid holidays and sick pay? What a bloody cheek. See that's what all the Tory I'm alright Jack forget about (asides from their working class roots and how you should be looking at the bigger picture rather than poking your petty little finger at your own) whilst sitting in their offices having rights - yes, you get paid holidays and sick pay because of the unions you muppets. And what do you really do for others that justifies your salary? Do you really think your company would give a toss about making you redundant irrespective of giving a lifetime of service? Of course they don't - they don't care about you. Well, they can do that now can't they as unions have become so weak because their own haven't the balls to make a stand. We live in a culture of fear.  I can't help feeling that if you are of right wing persuasion you are actually a bit...how should I put this...ignorant?

What I really liked about the Bob Crow I grew up with on the telly was his passion for fighting for something he believed in.  How many people do that these days? I'm pretty sure he lived and breathed his job. Most people are so apathetic - only today I read the Tories have outsourced £1.5 billion worth of  NHS contracts to the private sector with cancer treatment being one of them. When has privatisation ever meant a good service and value for money or more importantly CARE?! Let us think about that one shall we - BT, water companies, utilities, our national rail network, our post office and now our NHS.

Naturally there have been comments about his estimated £80-£120k salary, taking an expensive holiday and living in a council house. So what! So what he got paid a decent salary to fight for the working people - I'm pretty sure he worked all the hours and was dedicated to his cause and he'll be let in at the pearly gates. The bankers can earn millions and sit in their fancy houses and what good have they done for anyone? What have they given back to society - closed libraries, sure start centres and austerity and they still get obscene bonuses.

So your train was cancelled and you had a bit of inconvenience well you'll have more of that to come when you need the NHS and other services. I shall leave you Billy Bragg's facebook status today. RIP Bob you did good.

Very sorry to hear of the tragically early death at just 52 of Bob Crow, leader of the Rail, Maritime and Transport Union. I saw Bob many times at Tolpuddle and other union gatherings. He was a veteran anti-fascist, playing an important part in helping to defeat the BNP in Barking & Dagenham in 2010. Demonised by the right wing press for standing up for his members, the Labour movement has today lost a real champion of working people.