Is this month just whizzing by or what?  I think so - Christmas seems a long and distant memory. I have managed to walk well in excess of 10,000 steps (except Saturday 9,000+) for the most part of the week. When I do my power walking its in excess of 20,000 steps. I managed to do this on Monday (in the drizzle I'll have you know) and on Wednesday - wearing my Fitbit and Zaggorra wear. However, on Wednesday it suddenly occurred to me that I had a birthday cake to make. My son's birthday cake. He is the grand total of 10 years! Ekk double digits. So Thursday I set about trying to re-create a Minecraft cake. Now, if anyone doesn't know what it is here. But essentially its a virtual lego with (in my opinion) pretty naff graphics but the kids love it and schools are now teaching it in ICT. It is actually very educational as its not instantaneous, so creative and promotes team work.  My childrens' school has their own version - so you can imagine my son's delight when he found out they would be having Minecraft lessons in ICT.

So, I had to make a start on this cake on Thursday - when I'm making a birthday cake all my fitness regime just seems to exit the building pretty swiftly.  I forgot to wear my Zaggora wear (I forgot on Tuesday as well) and as buddy was at pre-school on Friday, I decided to use that time (it was raining) to finish the cake. Now, if I was a proper hard core fitness guru, I would have put the power/zaggora wear on the top of my priorities but alas I am not. And I'm not Wonder Woman either! This cake took me all morning and the best part of Friday afternoon to complete. This meant I wasn't working on it until 12pm Friday night so a good trade off I think.

I will take pictures tomorrow wearing my Zaggora wear as the 2 week challenge is over on Monday.  As ever, I haven't managed to wear them for the full 2 weeks - only 10 days.  One day that will be a triumph in itself. This week I have a filling to look forward to. I blame Slimming World I really do.  They should have a disclaimer on their 'syn free' drinks which says "although diet fizzy drinks are syn free and we say drink as much as you like it will actually rot the enamel off your teeth and you will require lots of fillings you never needed before". Suffice to say I only drink diet lemonade/coke if I'm out which as you all know is generally a yearly event.

I have posted the cake pictures below. What do you think? I had little to work from really as if you google Minecraft cake a lot of naff ones come up - that's because its all about computer squares which is incredibly difficult to recreate. So I thought I'd base it on the front cover of the X-box game (which is £12 by the way so not expensive). I was quite pleased with the way it turned out and my son loved it. 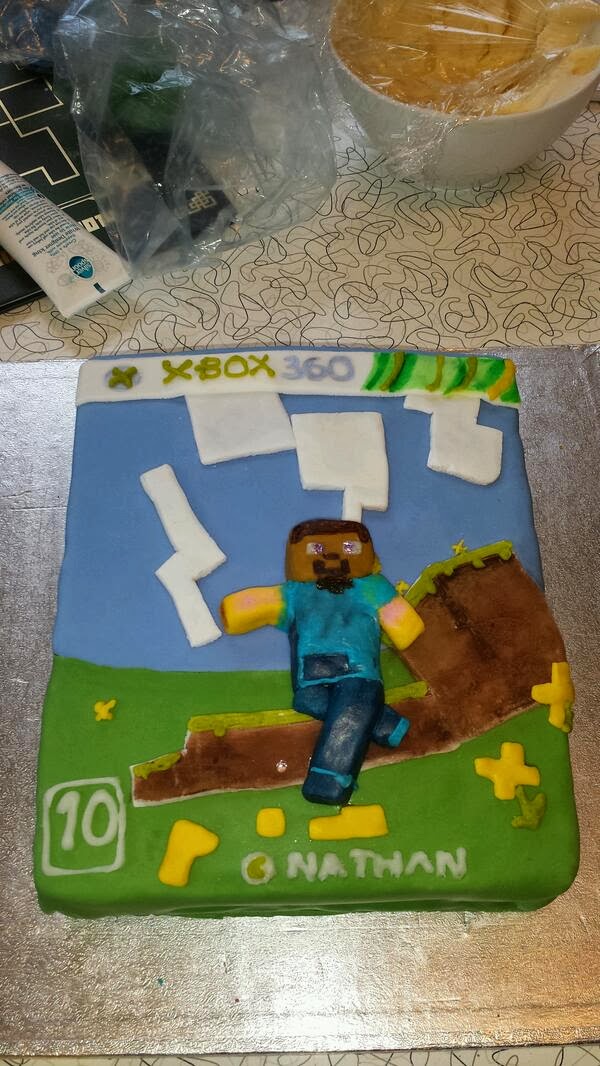