Well never one to turn down an opportunity to judge people....I'd thought I'd tell you all about our neighbours in France.  Last year, if any of you can recall, we were unfortunately enough to 1) be staying in a mobile home 2) sleeping on concrete beds that every expense was sparred on 3) situated next to The Campingnardo.

This year, we were far more fortunate to 1) be staying in a gite 2) having improved bedding conditions (okay so Buddy had to have the double and we pushed the singles together but still) but we were neighbours to two lots of families from Cambridge.

Now, the lay out of the holiday home was such that, there were two 3 bed roomed gites attached to each other. Then there was the Farmhouse (which could sleep lots) detached next to the gites. We all had communal access to the swimming pool and extensive grounds.  Lovely.

Our first direct next door neighbours were a couple (late 20's) who had an 18 month old boy. She hailed from Essex but not with an pearly queen accent and he had a funny accent - diluted northern I reckon. Anyhow, they were nice enough even though the toddler whinged all week and woke up at least 3 x every night. I didn't mind too much - when I woke I couldn't make out if it was one of mine - I was just pleased I didn't have to get up.

Anyhow, I think he was out of sorts but they still tried to enjoy their holiday by eating at 10 pm and having lunch out even though the poor boy chucked up etc.  I couldn't quite see the logic of travelling 5 hours to this place and then packing up after a week, to travel another 3 hours, to stay in the Loire but there you go. They were nice enough. If not 20 going on 50 but I'm sure they were thinking that must be a second marriage or what not. We all do it don't we? Talk about other couples? Even us couples talked about the couple who owned the place. We'd all worked out it was a second marriage, that the first wife died and various theories came up about why they were selling up. All good fun.

In the farmhouse were a professional couple - I could sniff the degrees a mile off although no one discussed who did what etc (except our Essex friends). They had two girls and the eldest was the same age as our daughter so they quickly became friends.  The mother was pleasant enough and on the first day I gave her some matches which she didn't bother to return. Mmmmm. Also her daughter was not so sweet and innocence (and I also hold my daughter responsible) when she proceeded to attack my eldest with swing ball bats until he had a huge bruise and broke down!  Mmmmm. 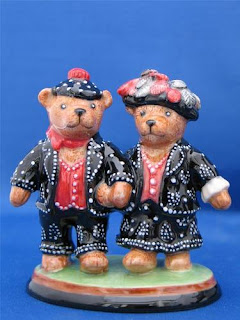 Is my husband really a Pearly King masquerading as a pie eating northerner? Pic ebay

My daughter was obsessed with playing with this girl and when we were in the pool she encouraged her to come in - but she just stood and watched and was quite precious. On one occasion my daughter wanted to share a cake we had purchased for the boulangerie. We cut half and off she trotted to give it to her new friend. A few minutes later a quarter came back. By all accounts that was far to much. Really?! How rude is that. Just accept the frigging cake it wasn't that big and who does that?  Besides, this girl had been giving my daughter those sugar necklaces during the week which if you want to get all food police on me is far worse.

To be honest, without the risk of sounding like an inverse snob, they were a bit up themselves.  I mean its not like we were doing the Lambeth walk and I haven't got an Audrey Hepburn accent in the style of My Fair Lady promise guv. Although my husband does sound like Dick Van Dyke when he attempts a southern accent.

They pissed off to the Alps after one week with talk of buying there etc and the next day enter...another family from...Cambridge....stay tuned for part II of The Cambridge Crew.

In other news, I am now ranked 348 in the tots100 pretty good considering I didn't blog at all during August, tweet etc. I would love to get into the 200's as then you get the number on the blog.  I did a great 10 mile bike ride on Monday and nearly got killed.  I was going straight in the cycle lane and a car was turning left as I was going straight.  I looked over my shoulder at the last minute and applied the brakes. It was so close. I'm talking an inch and I nearly burst into tears with shock, fright etc. I'm also annoyed with myself as I need to get on the pavement at certain junctions and it is a classic get killed as a cyclist - turning left or right.

Email ThisBlogThis!Share to TwitterShare to FacebookShare to Pinterest
Labels: Audrey Hepburn, inverted snobbery, My Fair Lady, people who are up themselves, snotty neighbours on holiday