Well I did promise a part II of my thrilling instalment of families on holiday. By the way, I added a picture of the cake that my daughter gave on the previous post. Huge wasn't it?!

Anyhow, the next Cambridge couple were located in the farmhouse so they weren't next door to us. This couples children were fine and were all girls 6, 3 and 1. No swing ball bat welding, cake returning, daughter this time.

On the first day, the husband says "did you see the granddad?" I said "that's not the granddad that's the husband!" Now my husband thinks our age gap of 10 years is big so I had to peel him off the floor with this couple. She was 42 and he was comfortably in his early sixties. In fact, we overheard him say he had children who were 42, 37 and 33.  He was quite the hands on dad if he was in full view, however, when they were invited to the owners for a bbq (she was best friends with the owners daughter) he was quite the intolerant dad.

Much like people that age would be.  He was getting most annoyed with the middle child who wouldn't sit still for 10 minutes let alone 2 hours. Just listening to him was exhausting enough.  There is a reason you're meant to have kids at a child bearing age - although I accept the unfairness that men can churn them out at any old age (think Charlie Chaplin, Rod Stewart etc) although it doesn't mean it makes it easy!  I couldn't think of anything worse than parenting a 1, 3 and 6 year old at the grand old age of 63. It must be exhausting. Anyhow, each to their own. That wasn't an issue.  He actually reminded me of my granddad (my mum's dad) with his posh voice and what not (although my mum doesn't know where her dad got his posh voice as he was Battersea born and breed - actually she does, by all accounts my gran's parents thought he was common as muck hence the tory boy accent).

He was pleasant enough but she was a bit up herself I have to say. She had this bizarre habit of walking around the grounds in her dressing gown, clutching a bottle of wine in one hand and a wine glass in the other.  Perhaps, the novelty of the older man had worn off and the stark reality had sunk in.  She did chat but I had to look right at her and say "morning" before she would engage.

She had decided to leave the last day for the big family trip to Le Pal for some reason. However, on the day before the husband had managed to drive up a kerb which gave them a flat tyre. He changed the tyre with the spare but didn't put the nuts on properly. This was discovered at the garage when he went to replace the spare tyre.  This meant they had to wait until 3pm the next day to get a new tyre and when they went to collect the car - the French had put another tyre on! 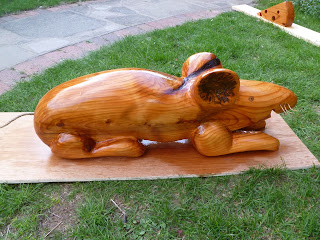 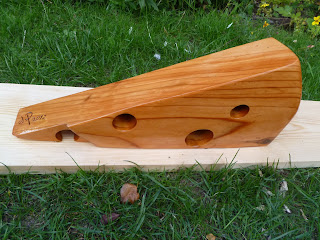 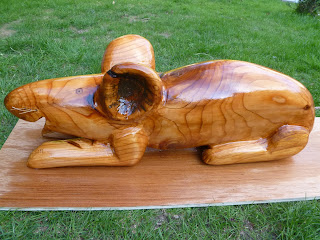 When we came back from our day out she was not best pleased. I was carrying my wooden mouse and the hubster the road sign. She didn't even comment on them - how could you not notice I'm standing chatting with a huge wooden mouse in my hands!!  She said "I am so annoyed with him" "we've had to pay £400 all because he didn't put the tyre on properly." "we've been turned over the car only passed its MOT 2 weeks ago".  I was sympathetic and did the appropriate "really?" and "oh that's awful" but her mood could not be lifted even when I said "well we happened to buy a mouse today" to which she replied "mmm I can see that" and off she went.

So there you go - you can plan all your packing, route and accommodation but you can't plan for the Cambridge Crew.

Until next time....which will be tomorrow as I have to update you with all the exciting things that have been occurring this week.
Posted by Unknown at 18:02

Email ThisBlogThis!Share to TwitterShare to FacebookShare to Pinterest
Labels: families you meet on holiday, fathering children at an old age, older dads