I'm having a Wimpy - we'll be grilling, frying and singing (!) come on over to us. Or something like that. I couldn't find any 1970's Wimpy adverts just one from 1987. What of all this Wimpy talk I hear you ask? Well I have neglected the blog - what with the lovely weather et al - I fear blogging is a winter sport and when your blog is about dieting, its best to be up and at them, rather than sitting on lardy arse typing about it.

So this is my catch up disguised amongst the Wimpy talk. More of which in a moment.  Gripping stuff I tell thee.

So last week I lost -2lbs and I haven't even logged it onto my weight loss chart nor did I keep up with my diary. Shame on me. I'm a bit slap dash with that especially during these summer days.  I was out on the bike from Sunday to Sunday (21st July) 4 time. Although only one of those was my 10 miler the others were 5 miles with the children.  I have not, repeat have not, been on my bike for nearly a whole week.  I felt a bit flu like Saturday and pretty sweaty, wheezy, coughy and generally bit under the weather all this week. Last night I went to bed at 6.30pm and feel much better for it. I still have a little cough but I'm hoping I can get back on the bike by Sunday. I've missed it and have found this to be most inconvenient. My husband thinks I may be allergic to the guinea pigs even though they are outside or it could be the London car fumes I inhale as I do my bike ride (I have mild asthma so not ideal) or maybe I've just got a cold. I always say I'm never ill but I'm sure I've had something similar this year so can't claim that in a hurry anymore.  I normally shrug off things within a couple of days.  So that is partly why I haven't blogged the other is I find it difficult in this hot weather especially when I want to engage with family life. Blogging is a hobby - nothing more nothing less. I do it when I have time. And tonight is that time as the hubster is out selling garden plaques at a charity event.


It was also our 4th wedding anniversary on Wednesday. My husband is too good on the gift front - its become a bit annoying as I can never top them. The traditionalists say the 4th is flowers/fruit. Although a card I received said it was 'linen'. Anyhow, I decided on a blueberry plant because 1) he likes plants and stuff 2) it flowers 3) the fruit is produced in July - our anniversary and 4) he's a bugger to buy for. I received some beautiful drop topaz earrings as the stone represents 4 years and just for bonus points its also my birthstone. See what I mean!! We celebrated by taking the car in for its MOT (old romantics) it passed. To celebrate we had a Thai curry on one of the hottest days of the year courtesy of Sainsbury's.  We figured that we are going on holiday and Vegas beckons.  And I am currently keeping the British economy a float at the moment.

Seeing as I didn't feel 100%, I decided to take the kids into a small shopping parade to get their school shoes. Not content with my purse being well and truly fleeced (you know who you are - Clarkes), on the spur of the moment I decided to treat the kids to a Wimpy. It was a small establishment, looking all charming like, in amongst the throngs of coffee shops and my nan used to take me there way back when. Nostalgia works every time.  Plus it must be a fine dining experience if the chairs are fixed to the floor - what is with that? They haven't changed since I was a child.  Having said this, the menu was refreshing plain and simple - not like my KFC experience last holidays (I don't frequent these establishments that much as the menus do my head in).  A pity I didn't look at the prices as I may have re-thought my choice of a chicken salad - £6.99!! I kid you not.  It was a tiny piece of breaded chicken sliced over some iceberg lettuce, onions and a few cucumbers - can't remember if there was a tomato - no dressing nothing. Still - good for the diet.  The kids had nuggets and chips and my daughter declared to the waitress that "these are the best chips ever - better than McDonalds's". They do eat off proper china plates and what not and buddy did have a poo whilst we were there so quickly brushed off the £24 bill for lunch. 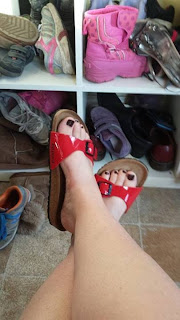 I then purchased some Birkenstock sandals in red from a little boutique (where I relayed the Wimpy price story cue "OMG!" comments from the shop owner). I figured that seeing as I'd spent £24 an extra £40 on top of the £60 for school shoes wouldn't matter.  Work that logic out if you can but don't tell my husband who, incidentally, needs to sell some of these plaques to fund my irrational behaviour.  I then trotted to WHSmith another nostalgic shop and parted with £20 for 3 books for the kids.  Not content with that I picked up a "few bits" from Marks and Spencer's - and I'm not even an M&S bitch like my friend who happily lets them fleece her for the same clothes she could buy in Asda made from the same sweat shop in China (you know who you are!).  And having been used to shopping in Aldi - M&S are the slowest checkout people in the world EVER!!  Speed it up god damm it!

My friend was astounded I could part with this amount of money on this little quaint parade of shops - well, my friends, it can be done! Never let a small parade deter a financial beating like a big retail outlet would.

In other mindless tittle tattle, I purchased some (a lot of purchases have been occurring) a pair of Zaggora hot pants.  I'm not putting in the link as I am not quite at the blogging pinnacle to receive a free pair to review. But if you are reading send me some. Ta. Yes, I succumbed to all the glowing reviews of people dropping 2 dress sizes by wearing this garment. They cost £45 and are made out of material which I can only describe as a wet suit.  They squelch a bit when you walk and are meant to make you sweat and burn more calories when you work out. As soon as I am back on the bike I'll let you know if they are 'magic' like my jeans or if Zaggora have an excellent PR machine and are planting good reviews to us desperados.

And finally, I have managed to persuade a blogger to not buy a trampoline for her under five today. Now, I know lots of people have them but I can't stand them. I think they are dangerous - they are in my grapes (need to be cut in half), roller blind cord and cherry tomatoes danger department. Why the fuss about them? Surely they are okay with the netting?  Well I don't think so.  They first caught my horror when my Auntie had a party and all the kids, naturally, were bouncing (without cage) on her rather large trampoline. My son was about 3 and daughter 18months. As they hopped on up on this bouncy guaranteed trip to A&E - I saw a prominent sticker which said "WARNING RISK OF PARALYSATION". It occurred to me, what parent in their right mind would trot into ToysRus and say "mmm, yes I'll have that toy over there - yup the one with says my child could be paralysed as that looks like fun". Exactly. Then a quick google confirmed my fears that they are really dangerous to children.

And on that happy note, I wish you all a wonderful weekend and I will report back next week on the Zaggora 'magic' hot pants.....

p.s my daughter won the school's got talent competition - she did animal impersonations and had a hard boiled egg drop from her bum. Very proud to show boat that one!