Okay for Buddy's 3rd birthday I made a Fireman Sam cake.  I like to make novelty cakes for the children and whilst this wasn't one of my best. I thought I'd share the whole nightmare that it was!

Funnily enough I had the actual Fireman Sam engine in the house (he'd pilfered it from my Aunt's house with her knowledge). I cooked a madiera cake which is firmer than a regular sponge.  I would ordinarily freeze it and shape a cake whilst it is defrosting and I don't know why I didn't this time! 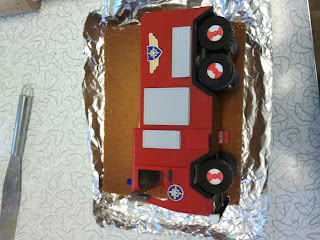 After cutting the rectangle in two. I then began to shape the cake which was quite difficult as I hadn't frozen it beforehand.  I then smothered the two halves in butter cream and jam. 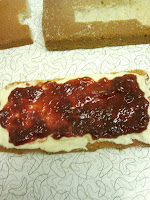 I did all the covering for this cake on a Friday evening - I baked the cake in the day and spent about 2 and a half hours doing this bit.  By the time I got to rolling out the red fondant I was very tired and you should accurately measure out how much you will need to cover your cake. If you do it properly, which I couldn't be arsed to do, you won't get folding at the corners because you've used too much fondant. To get the fondant on the cake just sprinkle icing sugar on the table (like you would for pastry) roll out then use your rolling pin to roll it up and quickly place on top of the cake.

The next day (Saturday) with 3 children around the house and a hubster I set about decorating it - DO NOT DO THIS if you can help it.  It doesn't make for flawless finishes I can tell you.


As one side was better than the other I had to work with the engine facing the right side when I work better and more naturally facing the left!  It does look like a simple cake but the wheels, grill etc made it very time consuming and in a quiet house may have been a pleasant job but after 3 hours decorating I was seriously losing the will to live. As like many of my cakes I have a real urge to get a wooden rolling pin and just smash it to smithereens whilst shouting obscenities!


Finally I used a fireman candle (I was going to make a fondant Fireman Sam but no, just no!) and shaped Michael's name (aka Buddy) using red fondant to resemble a hose - clever eh? I also made a little bucket and popped some blue sprinkes in.  I used some gylcerine (which you can't really see in the picture) and didn't colour it to resemble actual water coming out of the house by the number 3. And that my friends, is how you make a Fireman Sam cake. Now if I were you, I would head straight to Sainsbury's and hand over a tenner and be done with it!