Hello all! Hope you all had a lovely Christmas and if you didn't..well...there's always next year. Everyone is due a shit Christmas at some point in their life.  My friend had a memorable Christmas one year whereby she ate the total sum of 4 Pringles as unfortunately her marriage imploded on that day.  I had a rubbish one (circa 1997) when I had a row with my
ex-boyfriend in our flat - alarm bells did start ringing the moment we set up home. Anyhow, to cut a long story short we had a huge row after another incident of him drinking himself stupid on Christmas Eve which carried on into Christmas Day. I ended up driving to my parents and then driving back as my idiot boyfriend was threatening to commit suicide - when I did reach our flat he was sitting on the floor in his boxers, munching snacks and watching the DVD box set I'd bought him.

I've had a good Christmas this year which is quite apparent by my bathroom scales, which, I have not stepped on since the day after Boxing Day.  I had put on 4lbs up to that point - I'm hoping its stabilised as I haven't been back on them since. I did Wii Dance this morning for 10 songs which made me feel better and most of the treats are now gone and it'll be soup tonight.

I had some lovely presents including The John Lennon Letters book which I've even managed to read 50 pages of and a guide to Las Vegas - whoop whoop we plan on going for my 40th so I am very excited about that.
﻿ 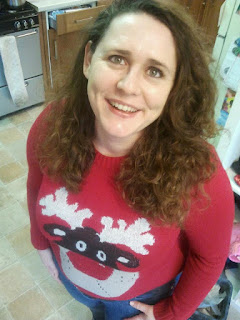