As in officialnardo.That's not technically a word but it sounds good to me.  Continuing on with my French holiday theme blog posts, and ignoring your "enough about bleeding France and your holidays...me, me, me that's all you go on about" thoughts, let me tell you about The Campingnardo. 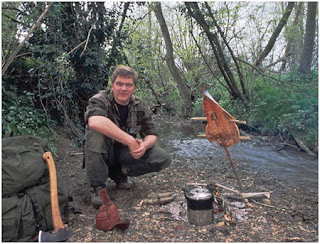 Ray Mears (pic from his website) - doubt he stays in Siblu caravans. What do you reckon?

They are experienced campers on the type of sites we stayed on - the static van ones not the Ray Mears lets rough it types. The ones that want to stay in a caravan, they chose to stay in a caravan not because, like us, they couldn't find any rented houses near the beach. No, no, no they love staying on the campsite with all that it offers.

Now after a 7.5 hour car journey with les enfants, dodgy back husband and Siblu failing to leave our welcome pack in the late arrivals box - I banged on the closed reception window, pressing my face against the glass with a look of sheer weary patheticness that the Irish girl had no option but to let me in. They "hadn't done the late arrivals yet" - we negotiated our way around the campsite to find our home for the following 2 weeks.

Now when you drive into one of these campsites you have to be careful not to knock down the many  people meandering around. They are on holiday after all.  Much like a cyclist in France, they aren't jumping out of your way for love nor money.   My husband instantly hated the the set-up or as he called it the "compound." I could see he was dreaming of the new house we had in Normandy the previous year, the space, the independence and no Campingnardo's to worry about. Talking of which, this one caught me well and truly off guard.

There she was in all her forty something glory. I mean I had barely got out the car and she was on my case.  "Hello I'm X (and I didn't remember her name all holiday until we exchanged kids email addresses) and this is X and X (who I did remember). She's 8 and he's 5 - How old are your children? What are there names?  We let them play here and they've made friends with the neighbours over there. They're English. We came here Wednesday, the weather's been good, we're off to the show later......" and on and on it went.

Breath woman, breath. I was polite and listened to her for a good 15/20 mins (in fact I think the car was unpacked during this time) eventually she trotted off to the latest Siblu entertainment so we could unpack. What have I done? I don't want to make friends and be sociable I want to do our own thing like we normally do.  Cue internal wailing.

I think she was a bit disappointed that I wasn't a Campingnardo as she soon discovered during the course of the holiday. I nearly cracked though as she was a Campingnardo worthy of cult status. Afterall why would you stay on this site if you didn't use the kidsclub, use the pool everyday, go to every entertainment show going and rarely leave the place? What sort of nutter was I? Now, don't get me wrong there's nothing wrong with this. People work very hard for their holidays and each to their own. How you want to spend your holiday is down to you. But please don't try and inflict your ideas of a great holiday on others.

For instance she would stop me and say "Have you got your fiesta tickets yet?" What the fuck are fiesta tickets I thought? Are we missing some firework display on the beach? As, no, I wouldn't want to miss something like that. Fiesta tickets were, in fact, dump your kids at 6pm-7.30pm and "You get a break" (this featured heavily in any converstaion).  Erm no I haven't got them we don't know what we're doing tonight. She would just stand there trying to get me to do all the stuff she was doing on a daily basis.

I consider myself to be a pretty strong charachter, I know my own mind but my goodness I nearly cracked on several occasions. She'd even cut out the middle man (that would be me) and ask my kids directly  "Are you coming to the show tonight?" "Have you been to the kids club?" "Why not? You are missing a treat." So then they thought they were missing out on something. Incedentially her eldest told me the kids club in the afternoon was great as they got to watch DVD's! Fan-bloody tastic. If I wanted my kids to be shipped off to clubs and watch DVD's well I could have stayed at home.

Essentially the Campingnardos rarely left the site. The kids were packed off to the kids pirates club from 10 am - 12pm and then back in at 4pm - 6pm. They trotted over to the sister site to watch every show going (which were pretty shit I only endured 2 - more of which later) and generally spent as little time with them as possible. This was there third year at the same site. They thought we were mad beach lovers as we were rarely at the pool and were out every night. No, we're not great sunbathers but we like to explore and get out and about and see France. We would come across car boot sales, markets and all sorts on our trips out. Plus we never really got going until 11am - the kids were sleeping in. I didn't want to be packing them off to kids club and having to be somewhere at a certain time. When I wanted them to clear off they had the freedom to go off in the park whilst we cooked tea but by and large we were together the whole time.

On the only day it rained constantly I decided to take the kids to the pirate show and Disney show. The hubster remained on site with buddy even though The Campingnardo had told me in no uncertain times to "put him in the buggy, he'll be fine - I did it with mine....blah blah." I just said no its fine he'll stay here. In any event, I joined The Campingnardos (I'm not that unsociable) and the kids enjoyed the pirate show but oh my goodness the Disney show and all that it promised was merely the entertainment guys singing various Disney theme tunes. I had to watch a Mary Poppins number in French and it was dire!  We were already at the front but Mrs Campingnardo was standing up and said "you can't possibly see it sitting down there (I could unfortunately)..well I'm not missing a single thing." Her son was bored shit less playing a game on his dad's phone, my son was watching the son and the girls weren't that fussed either. At half time (10pm), I said we were going. She was shocked she could not for the life of her understand why we were leaving - I even heard her question my daughter. I said the kids weren't fussed and we were going to catch up with the hubster. I was so sick of explaining my movements by the end of the holiday I can tell you.

Even on their last night they had a meal in the restaurant on site (I think a lot had to do with the fact they couldn't legally leave as they would have been over the limit - they liked a couple of beers in the day).  When I said we were going out I got that familiar Campingnardo look. What was I thinking? I'll tell you what I was thinking - support local businesses. We'd spent more than we normally would do on accommodation and Siblu were getting no more!

In any event, they weren't bad people and we chatted on a daily basis but I would have to say, whilst I don't mind caravan sites, I could certainly do without The Campingnardo that goes with them. Maybe it was just a one off and they are a rare breed but I'm not taking any chances.  Next year, we will be staying somewhere without any Campingnardos and that's just how we like it!