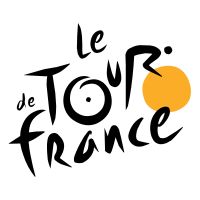 I'm so excited! If you only watch one sporting event this year it should be Le Tour de France. I just love it and I'm about to tell you why.

I started watching it probably around 2007/2008 and was hooked straight away. To be honest I didn't quite understand it all. Like I couldn't understand why the teams weren't all from one country. The teams comprise of many different nationalities. I couldn't quite figure out all the different jerseys - polka dot for King of the Mountains, green for the Sprinter, white for Youngest Rider etc. Then there was the Peloton and what that all meant, pace making, helping team mates, time trails, the points that can be collected along the way. But you soon pick it up and that's all part of it. Figuring out all the rules!  If you are a novice watcher then just go with the flow and you'll soon get it.

After that you then start thinking about all the practicalities like what they eat, what if they need the toilet and stuff like that. Only a women eh?!

There are so many reasons to love it. It lasts for 3 weeks, the scenery is spectacular whatever you think of the French (bit moody, serious - that's just my opinion!) you have to agree the country is stunning.  I mean they have sun and skiing for goodness sake. Its the 2nd most popular holiday destination in the world and they show case their country beautifully.

I love the characters (aka the cyclists) Mark Cavendish, Bradley Wiggins, The Schleck brothers, Cadel Evans and my personal favourite Jens Voigt all of which you can find on twitter. I love the bitching, the crashes, the eye balling, the excitment, the sheer amazing stamina of these guys, the crowds who get way too close to the riders and who I scream at to get back especially up the Alps. The man that wears the red devil costume - look out for him he's always there. The camper vans all parked up on the side of the road, the many different flags from all over the globe waving furiously, the signs on the road saying 'Allez Cavendish' and the like, the motorcylists that film the action. The speed these cyclists go down hill is quite breathtaking.

We have an outstanding bunch of athletes that are British. Sadly only recently people in this country began to talk of Mark Cavendish when outside his own country he is well known. The call him the Manc Missile - (he's from the Isle of Man) and is an outstanding sprinter. He won the green jersey last year and well deserved to. Prior to that he won lots of stages the previous year. I'm hoping he can do a repeat perfomance. His team always lead him out for him to pick up the points on the flat parts of the stages. You can see him at the back in the Alps. He will never come first on this stage!

My son also loves it and what a lovely bunch of role models. They don't whore themselves around like footballers. They are dedicated and anyone that can travel at speeds of a car around a county on 2 inflatable tyres has got my upmost respect.


You have to be an all rounder to win the Tour de France and this year we really are in a great chance of winning it with Bradley Wiggins. I say we but he rides for Team Sky but he's British and I was so gutted last year when he broke his collar bone in the middle of the Pelaton. Someone fell off and he then tumbled. His tour was over.

Last year one of the cars that film the tour and follow the riders knocked off two cyclists. It was awful. Thankfully they were okay.

In 2009 we went to Paris on our honeymoon and watched the final stage of the Tour. They do several laps. We waited for 3 hours at our little spot just to cheer on Bradley, Mark and the others Geraint Thomas another great cyclist. The atmosphere was brilliant. The hover of the helicoptors that film the event, the flags, the team cars, the cyclists throwing their water bottles. I highly recommend it.

So I am off now to watch ITV 4's coverage of this great event. I hope you join me.