Or I should say Saturday Spinning Plates.  I was on fire up to Thursday this week - I had done 3 x exercise including the dreaded run of which I spoke of in my previous post.  Good job I managed to fit the Wii dance on Thursday as no sooner had I finished I got a call to pick up my daughter. My son and daughter do a free after school club on a Thursday - chess and glee.

As I got into the car, the husband arrives back, looking like death warmed up. He has flu. Terrific. I arrived at the school to see my daughter crying. She had a high temperature and looked rotten. So I also collected my son as I couldn't come back later.  He wasn't overly impressed as he'd just sat down to play a chess match. My daughter eventually throws up later on in the evening whilst I'm checking on the hubster.

Later that night at 10pm buddy starts throwing up and screaming.  He did this about 8 x in total and finally stopped at 2am. I changed 2 sheets, 4 sets of pyjamas, also got thrown up on because he decided pre-chucking up, it was essential that we hug.  My daughter came out to say "I know why he's being sick I gave him a kiss goodnight." I was glad she improved as she's rarely ill and prior to her throwing up I was checking for signs of meningitis on the NHS website.  She's so dramatic in normal circumstances that its very difficult to tell what level of pain she's in.  I did think if she's got this much energy to scream and shout it can't be life threatening. That is my parent theory, by the way, for falls and such like. If they are screaming, in my opinion, they're okay. Its when they make no sound and are lifeless then its A&E time.

I hate it when they're ill.  Another good reason not to have anymore children - 4 lots of worry - no thanks. I am going to take a guess here but I'm pretty sure I got NO sleep on Thursday night.

A friend took my son to school along with her 3 children. Although when he was leaving he mentioned the small fact that he hadn't slept due to all the noise.  Later when I pick him up he looks awful, tells me he fell asleep in class and is still unwell today. Last night he was whimpering on the bathroom floor saying he couldn't walk! Our house is as sick as a small hospital.

Oh and whilst everyone appears to be a bit better, buddy threw up this morning over the husband who is moaning that if he were a horse he would be shot and various knacker's yard comments. A nice big dose of self-pity to throw into the mix.  So to cut a very long story short I haven't exercised today, the food diary hasn't been written and a cheap nasty chocolate bar was consumed on Thursday evening in addition to some jaffa cakes.

﻿
﻿I haven't played the pre-menstrual card yet on my diet but I may have to this week.  I'm sure I won't have lost anything and that's really pissed me off - I haven't remained focused. Maybe I can turn it around. I'm having omelet and salad for tea tonight and strawberries and yogurt for afters.


On a happier note I got another DM from Nigella on Friday - she just put "nope!" in response to a comment about left over cake. Today a follower of mine on twitter suggested that it wasn't Nigella tweeting but one of her lackey's. How very dare she! Now that may be true for some but I was confident it was her as who else would post so many pictures of what they are about to eat? You can just tell its her by her response. I said that was just mean. Now for the best bit - Nigella tweets (you can see it on my timeline) "You may think tweets not from me really but let me tell you I enjoy twitter & for me there is no sense in delegating pleasure".  Now that's Nigella alright. Only she could put delegating and pleasure together in one sentence. And to top it all she DM'd me this and my follower accepted she was, the genuine, article. I thank you. 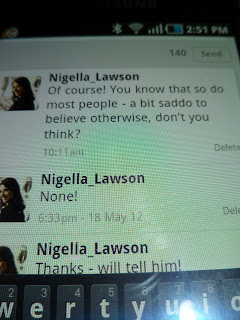 p.s won't be posting anymore 'proof' photos as that is also a bit 'saddo'!
Posted by Unknown at 15:03