Okay so it would appear I am hung over.  This is quite unlike me as I don't actually drink that much at all these days.  You see this glass, well its very small and I normally have just one of these a week if that. I'm becoming decidedly French in that I can make it last all night. And that's just the wine - boom boom!
﻿﻿
﻿﻿

Last night I had 3 of these filled with some lovely red wine which invariably made me crack open the pistachios.  Me and hubster watched a John Candy film "Summer Rental" which was quite funny and got me thinking about the big man. He died aged 43 whilst on location in Mexico. By all accounts he'd cooked up a lasagne for the crew, went to bed and died in the night of a heart attack. Probably brought on by his obesity. He was very overweight in the film we watched last night, but for him he was relatively slim as in his later films (e.g Uncle Buck) he was massive.

So exercise wise this week has been very good. I've done 3 workouts and I plan on doing the Biggest Loser later on today and the Wii dance tomorrow. The food diary has been absent though and I have been in high spirits all week which makes me less focused. Why the high spirits? Well rain stopped the hubster working which meant he did my ironing, had the little fella whilst doing the school run, made wooden names for the kids and a fantastic Mr and Mrs one for me. Not only that he made a giant cupcake queue stand for the PTA and in general being a real love and he's not even having an affair!   I did get nominated for best writer in the madblogs awards - total shock, had a catch up with my friend in Hong Kong and had a nice week with another friend who reminds me of my honkers friend in that you can just call and say "what you doing?" "pop over". They are few and far between. 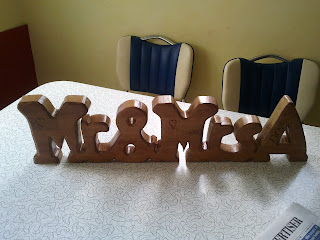 Oh nearly forgot buddy is sleeping through properly and I have to wake him at 8 am on a school day - this morning he woke at 9.45 am! So back to lie ins - I can hardly contain my excitement at the prospect of having a lie in at the weekend. My other two wake between 7-9 am and know that on a Saturday they are to go downstairs - do not disturb is the order of the day.

Then I found this piece of paper. On one side was a hand drawn map of Great Britain which included the Orkney Isalnds no less and on the other side was this:-

I am a robot from the 1470's. I travelled the world. This is my adventure.

I crash landed in England. Their flag is (draws picture). I invaded a house and a couple of shops. I found some paper and a pen and wrote all this. Morning - have batteries charged and have a hunt for money called pounds and buy it on books and batteries. Afternoon - visits London Zoo and finds out facts about the country. The population is 60 million (the whole of the United Kingdom). The food is mainly fish and chips. I liked the lizards the best.  Evening - I visit London attractions like the London Eye and Big Ben.

I read some of my Roald Dahl books when I've invaded a plane and made the driver drive me to South Wales. It was a five minute drive. The people speak Celtic languages. I got caught up in a war and fought the Romans.  I kindly changed the future and defeated the Romans.  I used a weapon that is not to be wield by a human. It's where I suck some of the planet and throw it at the Romans. Under the ground are groolies that I like to put in.  One bite from one and your dead.  The next day I read all of James and the giant peach, recharged my batteries which took hours and played chess with the chief of the army. I won.

My husband is such a great writer! Oh I am a wit aren't I. I did hesitate about putting this on my blog - bit of an album filler I thought and would anyone other than the parents find this funny?  You decide!

Have a great weekend.