The Ghost of hoildays past.

Now for the good bit. Part 2 of my holiday post - this time pre-children.


﻿﻿I have been on many holidays that's one of the benefits of getting older - clocking up holidays. My early childhood holidays were caravaning or camping in not so sunny parts of the UK (is there such a thing sunny part of the UK?) like Bognor Regis and Lyme Regis.  My Granny and Grandad had a little shop there and I can remember helping myself to the ice-cream.  They also ran a B&B and we got to ring the bell to let the guests know breakfast was up. I can remember lots of Tupperware and Granny making home made food for her guests.  She was a dab hand at the old domestic stuff and would probably give Nigella a run for her money. I mean she made us personalised Easter eggs for goodness sake!

Later we would travel to France as my parents were sick of the costly dull holidays in the UK. I loved France from the moment our car landed on French soil.  I loved the road signs, the adverts in the fields, the weather, the French accent and of course the French boys.


I couldn't stand the ferry crossing mind and I still get sea sick even if its 'calm'. My husband reckons its a state of mind - I reckon he needs a slap.  I've even got sick whilst on a pedalo. I had to hang off the side whilst my boyfriend at the time peddled me to shore.  I have had well meaning folk (an ex-navy man I used to work with who I originally named Captain Birdseye) tell me to look at the horizon and eat something.  I tried this in Malta with my husband in the early days of our courtship. These are his words - he is 48 and he says things like 'courting'.  We hired a speed boat because I was going to conquer this you see. I did exactly what Captain Birdseye told me to do - I  looked at the horizon and munched my way through a whole tube of Pringles (ready salted). I'm a catch don't you know. Anyhow it didn't work.﻿ ﻿﻿﻿
﻿﻿﻿﻿﻿﻿﻿﻿﻿﻿﻿

﻿﻿﻿﻿Later there were the girly holidays in the Greek Islands. It was all the rage in the 90's.  Go on a cheap package holiday and travel at hours that would now make you stay at home. Smoke ridiculous amounts of fags (I gave up age 25 another blog post which involves Firestarter by The Prodigy and A&E) get up at 1 pm have brunch, lie on beach, have nap 5-7pm, get glad rags on, dinner 10pm - return back at 4 am. Repeat for 2 weeks.  I have much more to say about these holidays but what goes on in the Greek Islands stays in the Greek Islands.
﻿
Then there's the memorable couple holidays. One in particular which involved my best friend, her ex, my ex and the hiring of a jeep. My ex decided that the little sign that says "do not go off road" need not apply. Even when he blew the tyre and we had ample time to turn the sodding vehicle around and go back he chose not to do so. We go up a dirt track the width of our vehicle and climb what can only be described as a mountain which has a sheer drop to our right and took 3 hours to climb. There was even a shepherd's hut at the top for peat's sake.  Never before had I seen my friend shout at her boyfriend but when he decided to take a snap at the top she let rip.  We reach the top and by this time have run out of petrol so the ex knocks the car into neutral and free wheels down the mountain. My hair resembles dreadlocks by the end of this off road experience from the dust that has gathered up in it. That incident is much like the Italian hellish journey only its me and my friend's equivalent.  We still can't really talk about it even though it was 17 years ago. Again the scars run deep on this one!

Then that same friend and I backpacked our way around Europe which really is a post for another day. As is tales from Cuba and the most terrifying air plane journey I have ever encountered. 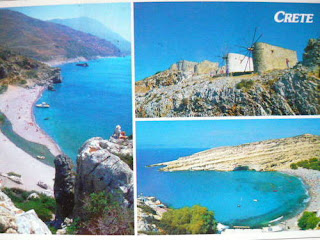 One girlie holiday that stands out more than most was my near arrest in Crete. I am obliged to share this with you purely for blogging fodder. Now the story goes that my best friend (yes that same one) had been jilted by her husband to be. This was, most inconveniently, after the wedding dress had been purchased.

I decided the best cure for a broken heart was 2 weeks in Crete self catering - £300 jobs a goodun.  The night before we went clubbing in our hometown and had our usual 2 am snack - a kebab. We got in line at the taxi rank but some gobby girl started accusing us of jumping the queue!  My friend much smaller than me explains no we weren't.  I take one look at the girl and say something along the lines of "shouldn't you be at home studying for your GCSE's?" For some reason she takes umbrage to this and punched my friend in the face who was merrily tucking into her kebab.

I was about to retaliate when a bloke much older said he'd punch the lot of us. Time to get the hell out of there me thinks. We jumped into a taxi whilst booting the man with one leg out the door and got back to her maisonette.  Frozen peas sorted out the mark on her face and the next day we boarded our flight to Crete.﻿

On this holiday we had nice accommodation and I have to say I have yet to sample a seafood pizza quite like the ones we experienced on that holiday. They were amazing - lovely and fresh made in one of those open pizza burners with fresh ingrediants. We are both partial to a bit of seafood.  We were befriended by 3 French guys - nothing untoward going on I had a bit of crush on one (I had a boyfriend at home albeit a bit of a nutter - see above) but he liked my friend. They hung out with us as we had hired a car.

We would go drinking in the various bars and clubs. One (we later found out was an English run one that was at odds with the Crete mafia - pah hah hah yes you heard right Crete Mafia!) The lads behind the bar were jobbing like many English back then and were friendly enough.  The young lad says to me I've got a trick with an orange.  Okay. He hops over the bar puts the orange in his mouth with the skin on the inside and the flesh on the outside. I'm to suck the flesh all a bit kinky really but a 18 I was game for a laugh it was kissing but orange kissing.  Before I could get get stuck in a feel a tap on my shoulder. I turn around and there's this small, fat Cretian police officer saying "come with me to the police station". I'm thinking that Crete isn't in the EU, I'm fucked metaphorically and literally and the film Midnight Express. Thankfully my friend and the 2 chaps behind the bar say they are coming too and weren't going to let be led away on my own.


The station is like a 2 minute walk away. So we get there and I'm told to empty the contents of my bag. This big fat greasy sleazy copper who really wouldn't look out of place in the film Midnight Express looks me up and down, pulls up his belt and says I have lovely green eyes! I'm thinking oh shit! Anyway, he questions us all about the orange incident and we have to present our passports (we are going home in the early hours) and we get let off with a caution.  After we were released the two lads say this happens all the time as the bar owned by the Cretian (I don't think this is the correct term but I like Belgique for a Belgium person also) and he pays the police to scare the British customers at the British bar!


Anyway, it certainly did the trick as I was paranoid from the moment we got on that plane.  I was convinced that the fat PC Plod was going to arrest me at the gate or plant some drugs on me to get me back in the cells.  I only relaxed once that flight was in the air.

Now when I wrote the first post about holidays past and present I was positive that my pre-children holidays would be much more relaxing.  However, since writing this second post I am of the opinion that travelling with 3 children is a far more relaxing way to travel and indeed safer!