In the style of Michael Douglas...

..Father Christmas was paid a visit.  There was nearly a 2 hour wait where I lost the will to live. I acted out an imaginary scene in my head similar to that of the film Falling Down (starring Michael Douglas where he loses the plot).  I barged my way up the line (kids in tow) flinging all other children and adults aside, emptied the sacks marked boys 7-8 girls 5-6, grabbed the presents and said to the big fella "get a fucking move on you god damm mother fucker"! How long does it take to say what's your name, age and what do you want for Xmas?  On exiting I pulled out my sawn-off shotgun and blasted the 2 reindeer's, calmly walked out of the hotel and drove off in the Kia Sedona. 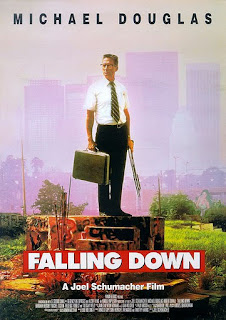 Of course this did not happen but this is a lesson to anyone that doesn't go somewhere that is a) quiet like a garden centre or 2) pre-book a slot.  In fairness the kids had a good time.  We took our ticket and were told it would be 1 hour (LIARS!) during this "hour" they were able to decorate a biscuit, a snowflake, read a book, have a dance on the disco, write a letter and post it to Santa or wait in a massive queue for face painting. They had juice out of a glass with straw, crisps and a run around in the hotel grounds. There were two reindeer that they were able to feed and a sleigh to sit in.  Father Christmas was pretty realistic (he had a German or Irish accent couldn't quite figure him out) the presents were decent and it cost £10 per child. Even the little fella was fairly okay but waited in the car during the final queueing process and we could take our own photos and not be right royally ripped off by the hotel's photography.  Plus it was 2 min drvie from our house.

Next year I feel the garden centre will make a come back.

I had a good time on Friday and Saturday when I was out for food and drinks. I have completed the Wii today and did Friday but am not that optimisitc for a loss but we shall see tomorrow on weigh in day
Posted by Unknown at 16:00