The presents have been pur-chased (on-line of course there is no other way) and today I was out getting the 'faffy' bits. That is the cards, wrapping and gift tags.  Now there are not many advantages with shopping with a toddler but the buggy acting as a cart horse is one of them. So I stacked my gift wrap on top of the buggy and trugged up the high street.  I find the whole what Xmas card shall I send to represent us as a family thing a bit of a chore.  By the way, I do like Xmas if that's not coming across, especially with my tree aversion to putting it up on 1st December and all.

I think right I really should put a bit of thought into this. However, I always pick some sparkly Rudolph or Santa inspired childlike card and think that's the one for us.  One year I went a bit poncy and got black and white typical English scenes with a splash of red thrown in.  I also can't be doing with the fancy wrapping paper - I go for the heavily printed Santa, penguin, Rudolph see through paper I got as a child.  I did wrap all the Father Christmas presents in one pattern last year in case the children wondered why he'd used different ones - of course they didn't notice in the slightest.  The wrapping paper is communal and does for my presents and hubbies also. 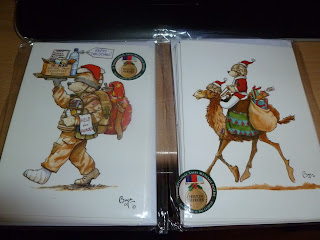 I've also bought charity cards even though such a nominal amount goes towards the actual charity but its the done thing and I've towed the line.  This year I purchased some Help for Heroes charity cards (from the school fair) which has a picture of a cartoon solider on a camel?  Then there's the individual cards - the 'across the miles', 'mum and dad' and 'special friend'. I used to go a bit mad on the old individual cards which cost a small fortune but as I've gotten older I tend not to bother so much only for the select few!

For years I've sent cards to people who can't be arsed to even send a boxed set one.  This was nothing personal just a general thoughtlessness and one which shouldn't be excused if you're not a teenager.  I thought well I won't let my standards drop and continued to send out cards but last year I thought sod it - I'm going to be tit for tat and not bother my arse either and we can all be thoughtless.

Now, if you are older than a teenager (who are recognised by most countries in the world as being totally self-absorbed) you should be acknowledging your friends/families with Christmas cards - no one is that busy believe me!