Penny for the Guy 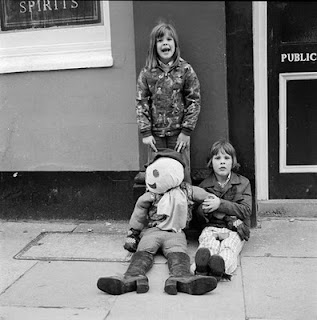 Well its Bonfire/Fireworks Night tonight and we are all set with our little collection of fireworks and sparklers. We won't have a 'Guy' though (although if we had a bonfire in the garden I'm sure we would make one especially).  Guy does still feature at the big organised firework displays but I haven't seen any child roaming the streets pushing one crying out "penny for the guy". They'd probably get told off for begging these days - much like Halloween.

We always made a Guy Fawkes to put on the bonfire when I was younger.  His head would be made out a pair of my mum's old tights stuffed with newspapers and his body was decorated with old clothes.

This picture is from the Museum of London and shows 2 children in 1969 sitting outside a pub shouting "penny for the Guy". It had been a tradition for many, many years.  In the 1970's we would either have a fireworks display in the garden with jacket potatoes, sausages and burgers or go to an organised event where they, too, would also sell the same but with the added bonus of hot soup! I'm sure I was more interested in the food aspect of these events than the actual fireworks.

Right, I'm getting hungry now! Tonight I haven't gone to any effort food wise except for a ready meal (much like last weeks).  My husband has already lost 7lbs whilst I've been on the 1970's diet - lets hope my weigh in on Monday catches him up.

Email ThisBlogThis!Share to TwitterShare to FacebookShare to Pinterest
Labels: bonfire night, penny for the guy