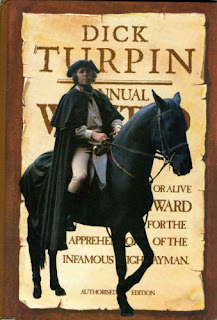 ..sprang to my mind this morning when I opened an email from EDF energy.  The energy equivalent of Dick Turpin - robbing highway man!  I loved this series (it ran from 1979-1982) and I used to think that Richard O'Sullivan who played Dick Turpin was a bit of an alright (!) even with his wonky teeth.  I particularly liked the opening credits and the music which I won't try and re-create like I did with Jaws.

So, EDF you robbing bunch of highway men. What nonsense do you speak of today?  Well they want to put my bill up by £37.00 per month for my 'estimated' usage of gas/electricity for the winter months.  Yes that's right not what I owe them (which incidentally my account will be in credit once this months payment is taken) but what they think I will owe them.

Not one for taking this lying down I sent an angry email explaining that we have a wood burner which we will be using in the winter months (which we have done for the past 3 years since my clever hubster came up with the idea) which is very cost effective.

Anyway, it got me thinking about how similar these times are to the 1970's with regard to fuel.  There were strikes galore (today our teachers are on strike this month) in the seventies, the most remembered would be that of  the coal miners.  I'll try not to get all political on you, oh sod it I'm going to anyhow!  Cast you mind back when the UK had its own energy resource.  What a great idea it was to shut down the pits and now we can all enjoy sky high energy prices as we pay through the nose via foreign providers.  We're totally buggered when the North Sea oil dries up hence the UK's billion pound (although we are all  told we're skint) involvement in Libyan affairs for their oil.

Back to the 1970's - it was cold in our house.  You were told to put a jumper on.  The radiators were on the lowest setting and I used to sit with my back to them to keep warm. They weren't bled properly so the heat only came up half way.  When I got my first flat the heating was up full whack!  How times are changing. There were many power cuts/strikes and you always had a supply of candles in the kitchen drawer. The board games would come out when the telly would just switch off and we'd all say "power cut".

So are we really that far removed from the 1970's today? I think not - my landfill rubbish wasn't collected for 7 weeks recently (ring any 1970's bells) I also have a slop bucket to but food waste in (re-branded as a 'food cady').

Well I am beginning to think of more and more reasons for dieting other than the bog standard ones.  Apart from getting journalists to have an original thought it is also about saving money.  I shall be burning some calories, getting warm to my Wii dance 3 whilst keeping the heating off - be on your way EDF highwayman!
Posted by Unknown at 13:10