So to the Giant Cup Cake that has become a part of our everyday lives. They don't just come in ordinary cup cake cases - the ones my nan used in the 70's.  They are cooked in huge muffin sized cases. But, the cup cake is not complete with the ten tonne of butter, sugar, flour and don't forget the vanilla essence - oh no - it has upon its crown MORE butter mixed with full fat milk (tastes better you see) and icing sugar.  Not complete its finished by a load of sugary sprinkles or some miniature themed topping made out of fondant icing. It is displayed with much fanfare and general oohing and ahhing.

There should be a facebook page for people who aren't selling these waist expanders which seem to be the modern day mum's equivalent to having a Tupperware party.

My nan made cupcakes or fairy cakes as they were know - they were half the size and half again. She mixed up some icing sugar a few hundreds and thousands and they were lovely.  As a special treat she would make the 'fairy' cake with the wings by chopping the top of the cake off, making some wings and holding it together with a little butter icing.

In the 1970's cupcakes were a treat and my mum preferred to make jam tarts - they were tiny things very easy to make and certainly wouldn't be expanding my waistline like the one's I made recently (note the added flake for good measure).  I feel Jam Tarts are really in need of a comeback.... 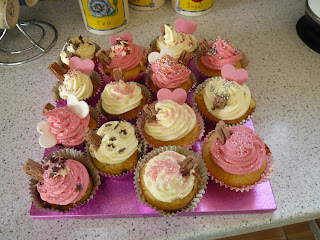